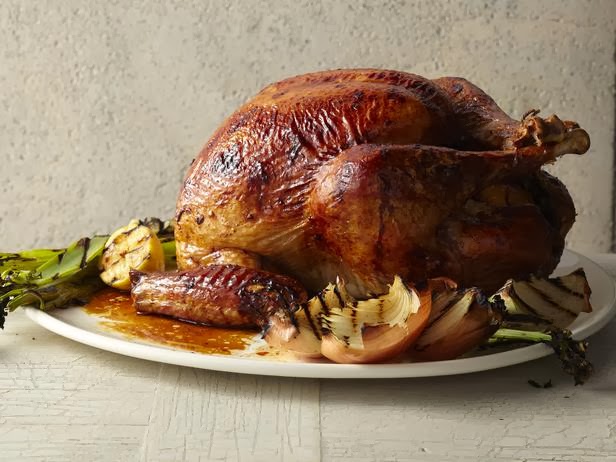 Have you ever cooked a perfect turkey? Were the breasts moist and tender and the legs completely cooked? Chances are, not always. Why is it so hard to get the dark meat cooked perfectly without over cooking the white meat? The reason is that a turkey is actually two distinctly different kinds of meat. The breast meat is very different from the leg, thigh and wing meat. This can create a real challenge when it comes to cooking the perfect bird.

The make-up of a turkey:/

At the biochemical level a turkey is a combination of approximately 3 parts water to one part fat and one part protein. The majority of meat comes from muscle fibers in the turkey, which are mostly proteins – notably myosin and actin. Because turkeys rarely fly but rather walk, they contain far more fat in their legs than in their breast, which results in the strong differences in texture between these sections of the bird – and the difficulty in making sure that all portions of the bird are properly heated./

The science of cooking a turkey:

As you cook the turkey, muscle fibers contract until they begin to break up at around 165 degrees Fahrenheit. Bonds within the molecules begin to break down, causing proteins to unravel, and the dense muscle meat to become tenderer. Collagen in the bird (one of three protein fibers that attach muscles to the bone) breaks down into softer gelatin molecules as it unwinds. The dryness of a turkey is a result of muscle proteins coagulating within the meat, which can result if it is cooked too long.

Temperature differentials in cooking a turkey:

Part of the problem, as described above, is that the different nature of the light and dark meat in a turkey results in different rates to reach the coagulation of the muscle proteins. If you cook it too long, the breast meat has coagulated; if you don’t cook the bird long enough, the dark meat is still tough and chewy.

Harold McGee, a food science writer, indicates aiming for 155 – 160 degrees Fahrenheit in the breast), but you want 180 degrees or above in the leg.

White meat is found in the breast and wing muscles of a turkey.

Turkey can fly, but it is not their main mode of locomotion. Turkeys use their wing muscles when they need a burst of speed to escape predators. These muscles produce a lot of power, but they fatigue quickly.

Turkey breast and wing muscles consist mainly of white muscle fibers. These fibers contract quickly and split ATP at a fast pace, though they become exhausted quickly, too.

White fibers are powered by anaerobic respiration so a turkey can move quickly even though its muscles may have exhausted the available oxygen. The tissue contains a large amount of glycogen, which can be used as fast energy source.

Turkey spends a lot of time walking on the ground. Their leg muscles are adapted for regular, continuous use.

Red muscle fibers rely on aerobic respiration. The protein uses oxygen to relax/contract so this tissue is rich in capillaries, which give it a deep color and rich flavor. Dark meat contains a lot of myoglobin and is rich in mitochondria, which produce energy for the muscle tissue. 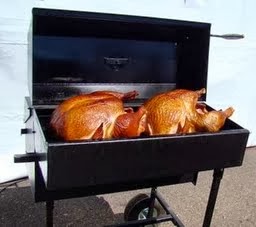 Smoked Turkey Smoked turkey has a different color and texture than oven roasted turkey. The meat may appear pink and have a smoother texture. This is normal. The smoking process causes a chemical change in turkey that changes the color of the flesh. As long as the turkey registers a temperature of 165 degrees F. it is safe to eat no matter the color.

This requires a cooking time:

I really do not recommend stuffing your turkey for smoking. This increases the cooking time (about 5 minutes a pound) and puts a lot of food in contact with potential bacteria. For smoking, it is best that your turkey is able to cook from the inside as well as the out. Brining: I like to use a simple salt/sugar brine recipe to enhance:

Keep the turkey cold while you brine it! It should be in the fridge or in a cooler, or at the very least in a tub of cold water. You can add ice to the water to make sure it stays cold. Before the turkey goes in the smoker you will want to add some flavor to the bird. This is best done with a spice rub. I use Three Little Pig’s Touch of Cherry Rub or Championship rub on the Turkey after I rub it down with Olive Oil first. With the smoker hot and the bird on the cooking grate, it is time to build up a good dose of smoke. Meat absorbs more smoke early on during the cooking process than it does later, so now is the time to get the smoke going.

Any wood (except maybe mesquite) is a good choice for your smoke. I like a mixture of hickory and cherry. This gives a strong smoke flavor from the hickory and a sweet flavor from the cherry wood. Of course, whatever you like is the way to go. Look for the center of the breast and push the meat thermometer into it, but avoid getting it on the bone. Bone heats faster than meat and will give you a false reading. Next, check the thigh between the leg and the body. Now do the same thing on the other side. The lowest reading is the one you use. You are looking for a temperature between 165 (Breast) and 170 degrees F (Thighs).